I came across a lot of girls wearing maid uniforms handing out flyers to men to invite them to their cafes. In maid cafes, the waitresses dress up as maids and treat their customers as their masters. It’s supposed to feel more like in your own home rather than in a cafe. 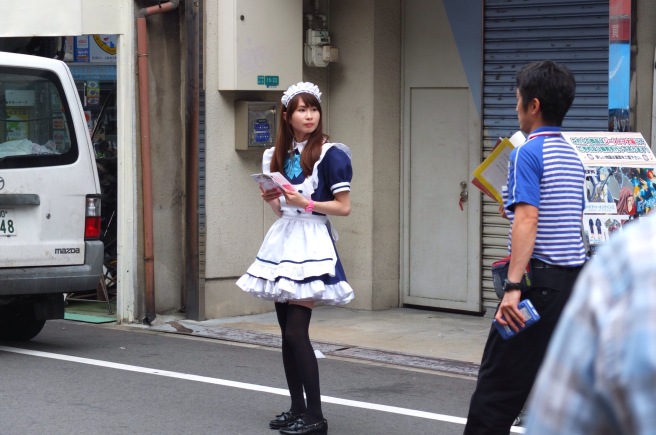 Maid cafes were primarily created for the mega manga nerds, who fantasize about having the cute maids from their comic books as their girlfriends. Guys who have a bit of a maid fetish. The costumes of the girls are kind of like French maid uniforms. 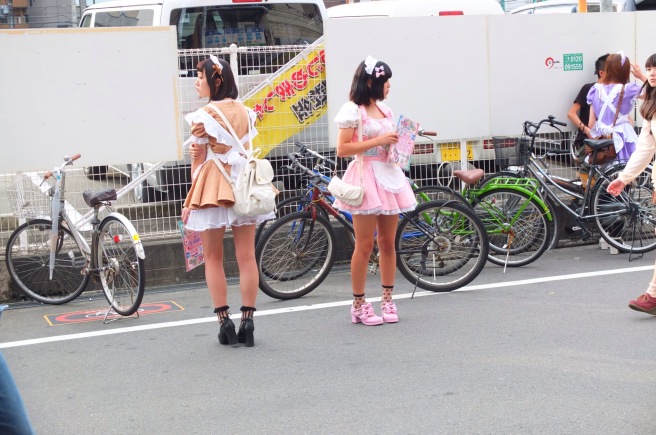 Maid cafes are open for tourists as well and I went to a maid cafe last year in Tokyo. It’s a really strange experience. Basically, you pay an entry fee and you can order sickly sweet milkshakes and ice cream and things like that. One of the maids will then talk to you a little bit when she serves you the drink. But you can also pay extra to have one of the maids play board games with you, look at photos together or talk to you a bit more.

My entry fee included a photo with one of the maids. I remember  that I had to choose a maid from a photo book. I felt so bad choosing one as I didn’t want to offend the others so I said I didn’t mind which one but that just got everyone confused and so I had to pick one in the end.

I always say that this is probably the closest I’ll ever come to hiring a prostitute… I felt a bit dirty afterwards.