One aspect I really enjoy about travelling is sampling the local cuisine wherever I go. So I did the same in Scotland and had some interesting food experiences.

On the first day we arrived in Aberdeen at around 10am so we dumped off our bags at the hotel and decided to get some traditional breakfast.

We weren’t quite sure where to go so decided to check out the little shopping centre near our hotel. Inside were a number of places to eat. It looked like a food court! 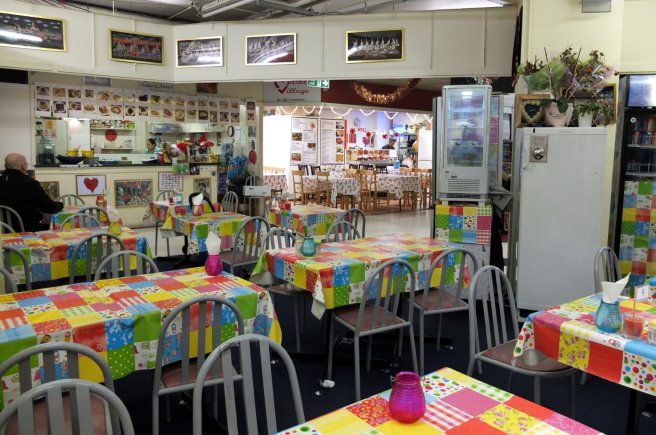 We chose the restaurant in the back of the centre (looked most authentic). You could choose your own breakfast items at the counter. 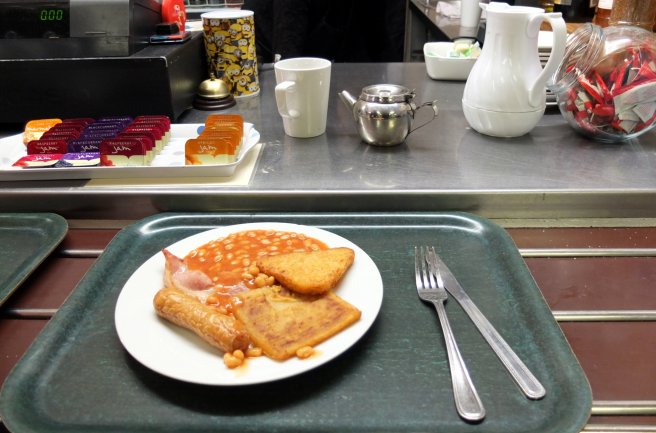 Matt’s choice was a bit more meat heavy. A sausage, a hash brown, bacon and lorne sausage (that square that looks like corned beef).

Looks pretty awful and I can assure you – it also tasted pretty awful. To go with this, there was a nice and depressing view across the restaurant from where we sat. Unfortunately the old guy with the pink hair was already gone by the time I took this photo.

After that breakfast we didn’t really have a full meal until dinner but made sure to stay hydrated with the famous Scottish drink Irn-Bru.

That day we had Italian for dinner, which was ok.

The next day we had a breakfast sandwich (I had ham, egg and cheese) on our way to Stonehaven. Incidentally Stonehaven is where another famous Scottish speciality was invented: the deep fried Mars bar!

So we went to that fish bar which prided themselves as the birthplace of the deep fried Mars bar and had fish and chips for mains and the Mars bar for dessert. 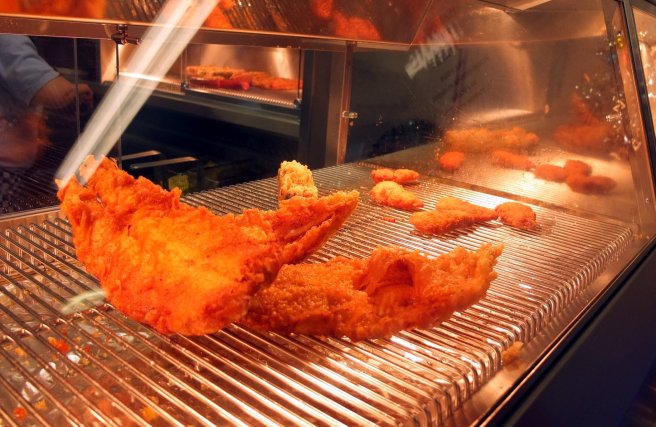 The Mars bar looks a bit squashed here due to logistical issues. It’s a Mars bar in batter (the same batter they use for the fish) and then deep fried. The warm melted chocolate and caramel is quite nice but I thought the batter didn’t really go with it.

Anyway, by that time we were basically just waiting for a heart attack to happen.

The next day we spent in Aberdeen again. It was the 1st January and everything was closed except McDonalds, Starbucks and a couple of pubs.

We decided to go to a nice and cosy pub and finally order some haggis! They had haggis pakora on the menu – a mix of Scottish and Indian. Wow. We had to order it and try it.

It was ok. The haggis taste wasn’t very strong and neither was the Indian flavour. But it was deep fried. Of course.

Onto the Aberdeen Angus beef burger. Well, I don’t know if it was Angus beef but I assume so, seeing that we were in the home of those cows!

After all that I couldn’t wait to go back to London and have a kale smoothie.

2 thoughts on “When in Scotland… eat fried goods”

Leave a Reply to Barbara B Cancel reply