I’m calling it: “the Buddha and the German”.

Our last day in Bhutan had arrived. I was sad to leave because I enjoyed exploring the country a lot. Going back to my daily life wasn’t something I wanted to think about just yet.

In the morning we went to the Memorial Stupa in Thimphu. The weather was lovely and warm and we had quite a lot of time there to watch people walking around the stupa  and meditate.

Then we were driven up to this giant golden Buddha which is overlooking Thimphu.

Inside is a museum containing many small golden Buddhas. Unfortunately it was closed on that day, so we just spent the time walking around the vast square and feeling slightly confused about the masses of gold, that seemed so unlike the country that we got to know over the last week.

Overall Thimphu was a lot busier and more commercial than any other parts of Bhutan that I’d seen. Well, it is the capital and biggest city, so of course it would be. We were even stuck in a little traffic jam once! I definitely preferred Paro over Thimphu.

Anyway, after another buffet lunch we were driven to a monastery.

Except this time it was for a special occasion. The tour provider, Exodus, had promised in their itinerary that we would be seeing a local festival. I had specifically booked this tour because I wanted to experience the festival. Unfortunately, any large gatherings were disallowed because of Bhutan’s National Assembly elections. The festival had been postponed to the next day, one day too late for us!

We all came prepared, though. Women were supposed to wear long skirts or dresses and smart shoes. Some of us specifically bought clothes in the local fashion. 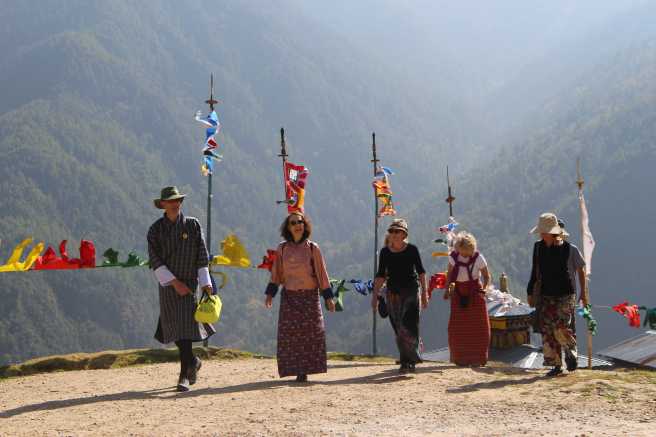 So Norbu figured out a way to show us a little bit of the festival culture, without breaking the rules. We weren’t quite sure how he did it, but clearly that man’s got good connections!

The monks started off by chanting for about half an hour or so, while we enjoyed our muffins and éclairs and walked around and took photos. 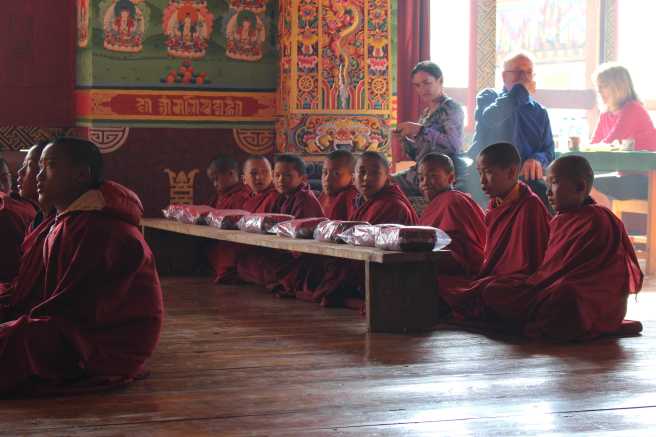 I particularly enjoyed watching some of the cheeky young monks.

It was the day before the actual festival and the monks were given new robes for the next day. That’s what the little packages wrapped in plastic are.

And then came the dancers. Two young men swirling and jumping around to the sound of more chanting and drumming.

At the end we donated money to the monastery. Norbu gave us each a few notes and we had to hand them to each monk individually. It was funny to see how quickly that money disappeared somewhere inside all that red fabric.

And finally I ask for a photo with Norbu, seeing that we were both in our best clothes!

This is us making funny faces. 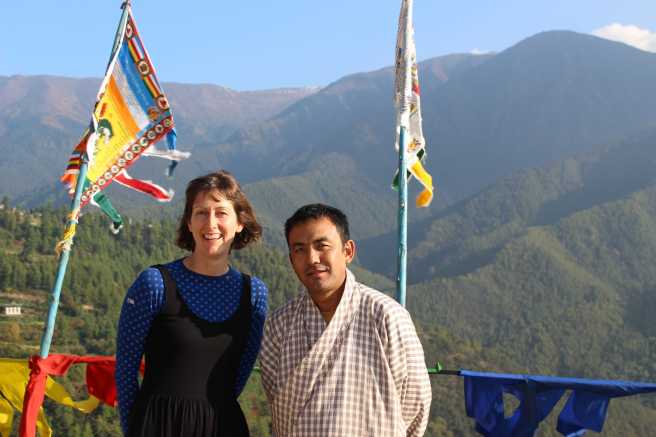 This is us making good picture faces.

And that completed the sightseeing of our last day in Bhutan! We drove back to the hotel in Paro because that’s the only city with an airport. Our flight was very early in the morning.

We had dinner in the hotel and Barry gave an emotional speech to our guides to say thank you for their wonderful hospitality. A few of us ended up staying up quite late and drinking with our guides. We didn’t want to say goodbye! One of us even tried to convince the Bhutanese tour operator’s office manager to change our flights to a later time, but failed. It was a hilarious evening.

Overall it was a fantastic trip. I would go back to Bhutan in a heartbeat.

5 thoughts on “Time to say goodbye to Bhutan… for now”